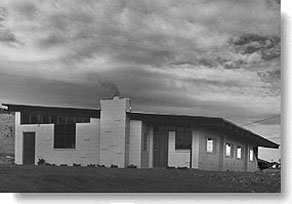 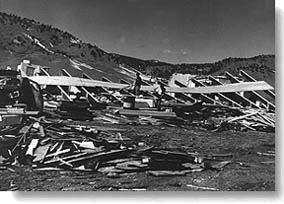 But the good times didn’t last long. Three or four months afer we moved into our new shop, a 110 mph Chinook wind roarded down the mountain, tore off the roof, and blew in the cinder block walls. I couldn’t believe the damage. The only thing left standing was the bathroom and the fireplace, and I didn’t have any insurance.

BNL: What were you feeling then?

CO: As I stood there that morning looking at the devastation, the wind still blowing so hard you had to crawl to keep from being blown over, someone handed me a bottle of whisky. I took a big swig and started picking up the hundreds of pieces of paperwork blowing about. Work orders, inquires, bills, caught in bushes, fences, and other tight places. The phone rang, I crawled under a section of the roof resting on my roll top desk, “Hello, we’re not open today, could you call back next week?”

You just started doing what had to be done. Start cleaning up the mess, start moving to a new location. Fortunately, I had some great friends, and they pitched in. We moved everything to a rented warehouse the next two days and were back in productin within a month. The old building materials were recycled and reused. With the help of friends, a lawsuit, and a new contractor, the shop was back up again in a few months. This time, slightly bigger and with the roof firmly attached, and walls poured solid with concrete and steel. 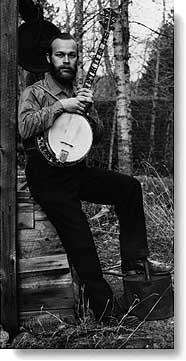 BNL: When did you start making wood rim banjos?

CO: About a year later, a young guy who had hitched-hiked out from Ohio asked if he could work at ODE. He had this dulcimer that he’d made, and it wasn’t too bad. He had such enthusiasm for what we were doing, I said,” Ah, let’s give it a try.” His name was Kix, or Creston Stewart. He owns Stewart-MacDonald Guitar Supply now.

Kix and I struck up a dynamic friendship. We also formed a great design team and helped each other’s ideas blossom. Kix had a lot of knowledge about vintage instruments. I had the ability to build these things. So, together we designed a whole new line of ODE banjos.

BNL: A friend of mine had an ODE, a long-neck banjo that had a wooden shell and separate metal tone ring. Was Kix one of the motivations for ODE making that?

CO: Kix had a lot of influence there. What happened was, when Kix and I got together, ideas flourished. We inspired each other to push beyond the boundaries of old designs and techniques.

We both wanted to build world-class banjos. The first thing we did was to start making the wooden-rim models. The open-back styles had a brass bracket band and the bluegrass banjos had a one-piece cast-brass resonator flange. I also designed new inlays, the ODE Style “D” pattern.

BNL: Was this an experiment then?

CO: We did a lot of experimenting, especially with tone rings. We finally settled on a cast bell-bronze flat-top design used on all our new banjos. These became the new line of ODE instruments which eventually became the Baldwin ODE banjos. That was the style “B”, “C”, and “D” Baldwin ODEs. They were and still are excellent instruments.

It took about a year and a half to do all this. That was 1965. I had a lot of energy in those days! (laughs). Back then, it was actually easier than it is now to get things done. ODE had twelve people employed, and though it was chaotic at times, it was fun. 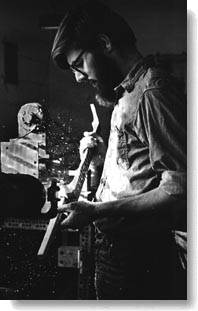 CO: Well, the whole thing, this banjo making, kind of took me by surprise. I never expected it to turn into a busniess. I did it because – you know – you’re kind of young, you take chances. I didn’t really expected it to grow into what it did. As fast as I built the ODEs, they’d sell. The company seemed to take on a life of its own, as these things do. You get picked up and carried away. Then Kix left. He was homesick for old friends and family and went back to Ohio.  I was also going through some major life changes.

The final blow came when I happened to be at the Newport Folk Festival in ’65, when Dylan made his historic switch from acoustic to electric music. I sensed the beginning of the end for the Folk movement.