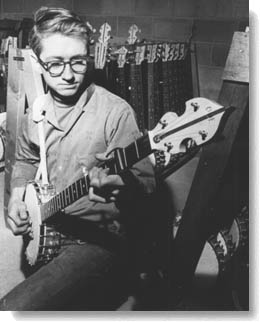 One thing you notice from the start is that Chuck Ogsbury is eminently likeable. He is sincere about his instruments, sincere about his love for the banjo, sincere about wanting to make the best banjo that can be made. Throughout his career as a banjo maker, Chuck has never considered quantity as the ultimate goal. Instead, Ogsbury believes in quality. He is ever searching for the “right” tone, which as banjoists know, is a quest rather like trying to find the right star or the right person.

Ogsbury has had a double life as an instrument maker. He first came on the musical instrument scene by making the ODE banjo, one of the favorite instruments of the folk revival era. In his first life as a maker, Chuck produced around 1,900 ODE banjos, ranging from basic aluminum pot long-necks to fancy bluegrass models. As Chuck states, many people remember or own ODEs he made in Boulder and like them.

Yet, true to his notions of an ever-evolving quality for which he constantly strives for in his instruments, Chuck thinks that the OMEs, the banjos of his second life as a maker, are so much better. One thing is sure: just as he was not able to leave the Boulder area for long, neither was he able to leave the manufacturing of banjos.

BNL: Was the banjo your first instrument?

CO: I started out playing guitar, two or three years earlier than the banjo, but I didn’t get very far. A poor teacher and a poor guitar ended my first attempt. That was when I lived in Kentucky. As a boy, I’d grown up around bluegrass but it wasn’t until later, when I moved to Colorado in 1956, that I really got into playing music.

At that time I was in engineering school at the university. We’d take a coffee break between classes.  I remember walking from the engineering area into the cafeteria next door. You had to go through this place called the Timberline Lounge where the mountaineering people hung out. There was a lady playing guitar and singing, and some guy playing the banjo. It just totally blew me away. Actually, the “lady” turned out to be Judy Collins. I don’t know who the banjo player was but that incident inspired me to start playing the guitar again.

About a year after returning to the guitar, I came across a fellow frailing an open back 5-string banjo. I’d never seen that done before. It was hard to tell how he was getting all those notes out of that banjo. That “Devil’s Instrument” must have cast a spell over me. I had to learn how to play like that. His name was Darius “Diz” Darwin, a relative of Charles Darwin. We struck up a friendship.

Then I met a local banjo player named Al Camp. He was in his eighties and still played banjo. Al and I became friends and I used to hang out at his house and listen to his stories. He started playing the banjo in the 1890’s, classical five-string style. When the boom of the 1920’s came along, he got rid of his five-string and picked up a 4-string. Apparently, nobody wanted to hear Victorian banjo playing in the 20’s. Later, Al went back to the 5-string. He ended up being recorded by Folkways. He played the old tunes, waltzes, and marches on a nylon-strung 5-string banjo. It was Al and Diz who got me started playing the banjo.

So folk music was becoming popular. I heard the album, “The Weavers at Caregie Hall,” and that was very special for me. After that there was the Kingston Trio, Peter, Paul, and Mary, Odetta, and many others. I was taken away by it all. Boulder then was kind of a “hot spot” for making your own music. There were many artists coming through the area. But more importantly, there were lots of students who would get together and play. I joined in.

CO: A few years ago, I went to this wonderful psychic woman for a reading. She didn’t know who I was, what I did, or anything about me. During the session, she mentined that she saw me building musical instruments. “How did you know that?” I asked. “Oh, you’ve been building instruments in several lives,” she said. “The first time was in Egypt.” Now this not only ran a chill through my entire body, but it got me to thinking. Did I really build instruments in Egypt? Were they banjo-type instruments? Were they for the rich, the poor? This was an interesting idea, and could explain lots of things.

Well, in this lifetime there were two things that inspired me to build banjos, besides playing. First, I grew up intrigued by building with metal and wood. My mother was in the antique business in Kentucky and I would go looking for treasures of the past with her. In the process, I became interested in antique firearms to the extent that by the time I turned 14, I was a professional gun trader. It was during those years in the trading business that I fell in love with the use of wood and metal as an art form and began learning vintage design techniques with those materials.