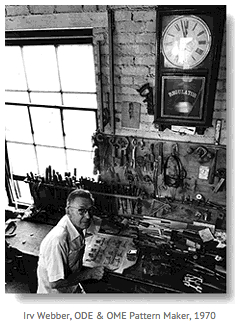 CO: After I satisfied my wanderlust, I settled down in the mountains west of Boulder and started designing and building houses. At that time, I had no intention of making banjos again. I flelt I’d designed and built some of the best banjos around, and there didn’t seem room for me to do more. But by the late 1960’s, acoustic music started coming back again. There was also another return to grass roots values. I recall starting to have thoughts of new banjo designs. One of the carpenters I worked with was a musician, Ken Welpton. Ken offered to help.

BNL: How did you come up with the name OME

CO: I thought it would be nice to keep a tie with the past, which was ODE. But, Baldwin owned that name. So I just changed the “D” to an “M” and registered that trademark around 1970. About that time, I traded for a piece of land that was part of an old homestead from the 1800’s, up in the mountains west of Boulder. It was at 8,700 feet and was a magnificent place, still is. So I built this big building on it and started tooling up for a shop. It suited me a lot better than being down on the plains where ODE had been. This place was a lot closer to my dream of living and working near nature.

BNL: That lifestyle is important to you and others in the West. So, you were able to live and work in the mountains?

CO: It’s a complex story. When I put OME together, I didn’t want to run the company all by myself. So, I gave away three fourths of it to three other guys.

CO: Well, there it was, the old hippie days no less. Love and sharing (laughs). I put OME Company together, thinking that everybody would have the same idea: Sharing. That turned into a real interesting situation. As one lawyer said, “The only thing you can be sure of with partnerships is that they don’t last long.” (laughs)

BNL: Do you still have that partnership?

CO: No. After, I put the company together, designed the instruments, and got things going, my partners decided they wanted to make more of a business out of OME. They decided that they wanted to move OME down to Boulder, while I wanted to stay in the mountains. We parted ways then. 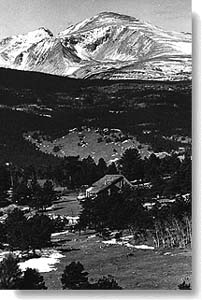 My partners ended up moving OME to Boulder while I stayed in Gold Hill. They increased production and started selling only through dealers, making mostly 5-string clawhammer and bluegrass banjos. A few, maybe ten percent, were 4-string styles. The peak year was about 1975, when the movie “Deliverance” reached its peak. I think 350 instruments were made that year.

BNL: Your partners must have had a pretty big staff?

CO: Yes. But then, bluegrass interest peaked and slowed down in the late 70’s. The 80’s were also slow. The festivals were still happening, but the popularity, the growth of the festival scene wasn’t growing as it had been in the 70’s.

BNL: After laying out for a while, when did you get more actively back into manufacturing?

CO: Well, one by one, the original partners left the company. Kelly left in ’73, and Ken in ’78. This resulted in leaving Ed Woodward, my only remaining partner, to actively manage things. I returned at that time to see what I could do.

Ed had worked with me at ODE. He was a tenor player and loved the 4-string banjo. He saw our potential as building bluegrass and old-time banjos as well as jazz banjos. We agreed on high quality but not much more. It was a very frustrating situation. For the next several years, I only worked part-time at the company. I was never really able to do what I felt needed to be done. In ’88, Ed sold his interest in OME back to me, and we parted ways. It was at that time that I was finally able to get significantly back into OME.

BNL: What were some of the things you did after you returned to OME?