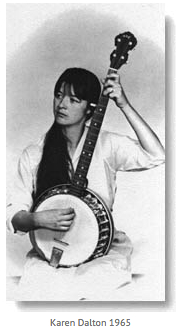 BNL: Is that when Baldwin entered the picture?

CO: About that same time, Baldwin was expanding, looking into possibly purchasing the Salstrom Banjo Company of Oregon, Illinois. On the day the Baldwin execs were touring Salstrom, there happened to be a banjo collector there name Clyde Richelieu.Clyde was very knowledgeable about banjos, and a strong ODE fan. He mentioned to the Baldwin people that he felt ODE was a superior instrument, and Baldwin ended buying ODE while Salstrom was later purchased by Fender. A few years later, Richelieu purchased Strom Banjos of Brainard, Minnesota, and started building Richelieu banjos in Oregon, Wisconsin, where the company still operates under Rick Tipple.

At that point I was ready for a change. I decided to get rid of everything I had except a banjo and an old car and a guitar, and hit the road (laughs).

CO: After selling ODE, I ended up traveling for a while, wandering around the country, drifting. I’d found a home for the ODE company, which was Baldwin. They were good folks to deal with, had a lot of connections in Nashville. they tried their best to get me to work for them, which I did for six months, to help with the transition so they knew how to do what we’d been doing. But I had been tied down for too long, and I felt a need to change.

Baldwin kept the company in Boulder for two years. Then they moved it to DeQueen, Arkansas, in 1968. I tried to find out how many banjos Baldwin produced, but no luck. They made the Ode between about 1966 and 1968 in Boulder, and then in Arkansas from 1968 till they quit, which was somewhere possibly in the early 1980’s.

At that time I was in engineering school at the university. We’d take a coffee break between classes.  I remember walking from the engineering area into the cafeteria next door. You had to go through this place called the Timberline Lounge where the mountaineering people hung out. There was a lady playing guitar and singing, and some guy playing the banjo. It just totally blew me away. Actually, the “lady” turned out to be Judy Collins. I don’t know who the banjo player was but that incident inspired me to start playing the guitar again.

BNL: Didn’t they eventually sell the ODE to the Gretsch Company?

CO: Baldwin owned Gretsch then! Baldwin had been making only pianos and organs. Then they got into this corporate mode of expansion. They bought Burns Guitar of the UK, Sho-Bud Pedal Steel, an electronic harpsichord company, Gretsch and others. Their idea was to create a full-line music business the quick way, by purchasing all these companies and then introducing them into their piano and organ chain divisions. They were apparently quite successful. Baldwin was also heavily into electronics. They got into military contracts, making guidance systems for Sidewinder missiles. Finally, they got into banking, because in the piano and organ business, you sold things on time payment plans. It became financing. First, financing pianos and organs, all the way into buying banks.

CO: Yes. They ended up, I believe, buying several banks, including the Empire Savings and Loan in Denver. They expanded big, buisness-wise with the banking thing. But apparently, they over-expanded and had to declare bankruptcy. This, however, wasn’t because of the instrument business and it probably had nothing to do with the banjo busniess. The banjo part was probably the one-tenth of one percent of their whoe business. They had several thousand people working for them. The banjo company might have had five or maybe ten workers. When they went Chapter Eleven, they started liquidating things and ended up selling the ODE Banjo division, which was part of Baldwin-Gretsch.

An interesting point: when Baldwin bought the company from me in 1966, they designed a banner that said “Baldwin”. They didn’t use the word, “ODE” on the peghead originally. However, they found that the market did not want a Baldwin: it wanted an ODE. So, they added the word “ODE” to the banner. Then I herad they eventually dropped Baldwin and just put ODE on the peghead. In fact, I just saw one downstairs (at the vendors’ stands), an ODE, with no word “Baldwin” on it, but it was made by Baldwin about 1980. So, the sequence of logos was “Baldwin”, then “Baldwin ODE”, then just “ODE”. I should have checked the serial number of that one I just saw.

BNL: Is the Gretsch ODE still being made?

CO: No. When Baldwin liquidated in the early 1980’s, there was an intermediate party that bought up Gretsch, or had the job or liquidating it. As I understand it, things just got destroyed and even the intermediate party went bankrupt. I heard Fred Gretsch Junior ended up buying back the Gretsch name and whatever came with it.

BNL: One of the music shops I frequent has a new Gretsch catalogue, full of fancy guitars, but no banjos.

CO: I don’t know if Gretsch builds any instruments now, or only imports them. Apparently, Gretsch bought out Bacon and Day in the Forties. So ODE is now part of Gretsch and Bacon and Day (laughs). The name ODE continues, but only the name, evrything else is gone.

BNL: So, when did you come up with the idea of OME?